Throwing a Lifesaver to Underwater Borrowers

The Federal Housing Finance Agency (FHFA) released its September 2012 Refinance Report (Report) on November 28, 2012. The Report provides some statistical information, most of which comes as no surprise to mortgage industry participants, while there are some tidbits of data that seem to demonstrate the impact of the Home Affordable Refinance Program, known as HARP, on the GSEs (viz., Fannie Mae and Freddie Mac). The end date for HARP was extended until December 31, 2013 for loans originally sold to the GSEs on or before May 31, 2009.
HARP was established in 2009 to assist homeowners who are unable to access refinance due to a decline in their home value. The program was originally designed to provide these borrowers with an opportunity to refinance by permitting the transfer of existing mortgage insurance to their newly refinanced loan, or by allowing those without mortgage insurance on their previous loan to refinance without obtaining new coverage.
The premises for HARP are simply stated, as follows:
1) Since the GSEs are already responsible for certain high LTV loans; and
2) Default risk is lowered by allowing a refinance of these high LTV loans; therefore,
3) HARP loans refinancing high LTV loans at lower rates reduce default risk.
One of my concerns with HARP, or as it is referred to now HARP 2.0, is it has failed homeowners because it just is not reaching enough qualified borrowers and many lenders take too long to issue approvals. One remedy would be to have the government expand its guidelines to include non-agency lenders and by removing certain features of the 2009 origination qualifier. Also, low credit scores remain an obstacle by preventing underwater homeowners from taking full advantage of the current HARP guidelines with respect to refinancing eligibility.
HARP has obviously triggered a wave of refinance activity, just as expected. In speaking with several of our clients that are very involved in HARP refinances, it seems that about 50%-75% of their refinance business may be coming from homeowners who have LTVs above 125%. Because the 125% ceiling on LTV was removed, some lenders are actually refinancing LTVs of 155%.
In the following discussion, I will offer some consideration to HARP's most recent survey.*
_____________________________________________________________
IN THIS ARTICLE
Overview
HARP Refinance, Quarterly Volume
Monthly HARP Volume by LTV
Percentage of HARP Refinances by LTV
Mortgage Terms, LTVs Greater than 105%
Total HARP, Percentage of Total Refinances
Timeline for Interest Rate Changes
Library
_____________________________________________________________
Overview

-More than 90,000 homeowners refinanced their mortgage in September through HARP with more than 709,000 loans refinanced since the beginning of this year.

-Since the program’s inception in 2009, the GSEs have financed more than 1.7 million loans through HARP.

-In September, 19% of HARP refinances for underwater borrowers were for shorter-term 15-year and 20-year mortgages. 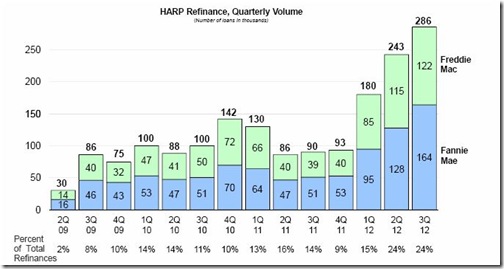