Chart deals with only the Gang of Seven (Final Rules).

Yesterday, I provided an outline of the Consumer Financial Protection Bureau's (CFPB's) Regulatory Agenda for 2013. As if on cue, the CFPB has accommodated us today with the first of its forthcoming issuances.* This pertains to the Final Rule regarding Ability-to-Repay, which leaves the Final Rule issuances this month for Loan Originator Compensation, Mortgage Servicing, and Requirements for Escrow Accounts.
The Dodd-Frank Wall Street Reform and Consumer Protection Act (Dodd-Frank Act) required that, for residential mortgages, creditors must make a reasonable and good faith determination based on verified and documented information that the consumer has a reasonable ability to repay the loan according to its terms. It also established a "presumption" of compliance for a certain category of mortgages, which was called “qualified mortgages” or "QMs." These provisions are similar, but not identical to, the Federal Reserve Board's (FRB's) 2008 rule and cover the entire mortgage market rather than simply higher-priced mortgages. The FRB proposed a rule to implement the new statutory requirements before authority passed to the CFPB to finalize the rule.
I have written extensively about Ability-to-Repay and the Qualified Mortgage.
Please feel free to review these articles.
In this article, I would like to mention the premises used as the reasons for an Ability-to-Repay rule (ATR). Then I will outline the essential features of ATR, followed by a review of the "Qualified Mortgage." Finally, I will provide a general summation in order to provide some context with respect to the Final Rule's implementation.
_________________________________________________
IN THIS ARTICLE
Premises for Ability-to-Repay
What is Ability-to-Repay?
What is the Qualified Mortgage?
Types of Qualified Mortgages
Summation
Library
_________________________________________________
Premises for Ability-to-Repay
The CFPB believes that when consumers apply for a mortgage they "often struggle to understand how much of a monthly payment they can afford to take on." Thus, according to the CFPB, the consumer may reasonably assume that lenders and mortgage brokers would not make loans to people who cannot afford them. But in the years leading up to the financial crisis, the CFPB asserts that lenders too often made mortgages that could not be paid back.
Therefore, the purpose of ATR is to require lenders to obtain and verify information to determine whether a consumer can afford to repay the mortgage and, per the CFPB, thereby help to restore trust in the mortgage market.
These are the premises upon which the CFPB has established the need for Ability-to-Repay:
-In the lead up to the financial crisis, certain lending practices set consumers up to fail with mortgages they could not afford.
-The deterioration in underwriting standards contributed to dramatic increases in mortgage delinquencies and rates of foreclosures.
-The Dodd-Frank Act recognizes the need to mandate that lenders ensure consumers have the ability to pay back their mortgages.
-The Ability-to-Repay rule protects consumers from risky practices that helped cause the crisis.
In its review of the above-mentioned premises, the CFPB had taken the position that lenders sold no-doc and low-doc loans where consumers were “qualifying” for loans beyond their means. Lenders also "sold risky and complicated mortgages like interest-only loans, negative-amortization loans where the principal and eventually the monthly payment increases, hybrid adjustable-rate mortgages where the rate was set artificially low for years and then adjusted upwards, and option adjustable-rate mortgages where the consumer could 'pick a payment' which might result in negative amortization and eventually higher monthly payments."
In plain English, the CFPB asserts that lenders should not be able to offer no-doc, low-doc loans, otherwise known as “Alt-A” loans, where some lenders made quick sales by not requiring specific, qualifying documentation, yet then offloaded these risky mortgages by selling them to investors.
As it was contended, these actions precipitated the collapse of the housing market in 2008 and the subsequent financial crisis.
Dodd-Frank provides the authority to the CFPB to define criteria for certain loans called “Qualified Mortgages” that are presumed to meet the Ability-to-Repay rule requirements.
The salient observation about ATR is that the CFPB is issuing this rule in order "to ensure that responsible consumers get responsible loans," as well as ensuring that "lenders can extend credit responsibly - without worrying about competition from unscrupulous lenders."
Read more »

As we begin a new year and prepare ourselves for the blizzard of new and revised regulations coming our way, I think it is important for us to consider the regulatory agenda that the Consumer Financial Protection Bureau (CFPB) has set for itself.* As you've heard me say so many times, preparation is protection. So, please undertake a review of the agenda that the CFPB has promised to pursue in the coming months, especially with the view of how best to prepare for the changes that are sure to follow.
It is worth noting that the CFPB reasonably anticipates having certain regulatory matters under consideration during the period from October 1, 2012 to October 1, 2013. And the CFPB will publish updates to its agenda periodically through October 1, 2013. These matters will be under consideration by the CFPB, primarily including various rulemakings mandated by the Dodd-Frank Act, such as several mortgage-related rulemakings and rulemakings to implement the CFPB's supervisory program for nondepository covered persons by, among other things, defining "larger participants" in certain consumer financial product and service markets.
The CFPB is completing several mortgage-related rulemakings in January 2013, even as it continues to assess the need and resources available for additional rulemakings. For instance, the Dodd-Frank Act mandates rulemakings to implement amendments to the Home Mortgage Disclosure Act, and to the Equal Credit Opportunity Act to create a data reporting regime concerning small, women-owned, or minority-owned business lending. Also, the CFPB has inherited proposed rules concerning mortgage loans, home equity lines of credit, and other topics from other agencies as part of the transfer of authorities under the Dodd-Frank Wall Street Reform and Consumer Protection Act (Dodd-Frank Act). All of these regulatory changes will require careful planning and clear guidance with respect to implementation.
In this article, I am going to highlight the regulatory changes that the CFPB has moved into their final stages. I offer a brief outline of the regulatory issues and the CFPB's likely resolution. Each of these regulations, now approaching the status of Final Rule, is extraordinarily significant and, in some instances, constitutes formidable challenges.
_________________________________________________
IN THIS ARTICLE
Chart
Consumer Financial Protection Bureau -
Final Rule Stage (Selected Rules)
Final Rule Stages
Loan Originator Compensation (Regulation Z)
Mortgage Servicing (Regulation X, Regulation Z)
Requirements for Escrow Accounts (Regulation Z)
TILA Ability To Repay (Regulation Z)
TILA/RESPA Mortgage Disclosure Integration
(Regulation X, Regulation Z)
Library
_________________________________________________
Chart: Consumer Financial Protection Bureau
Final Rule Stage (Selected Rules) 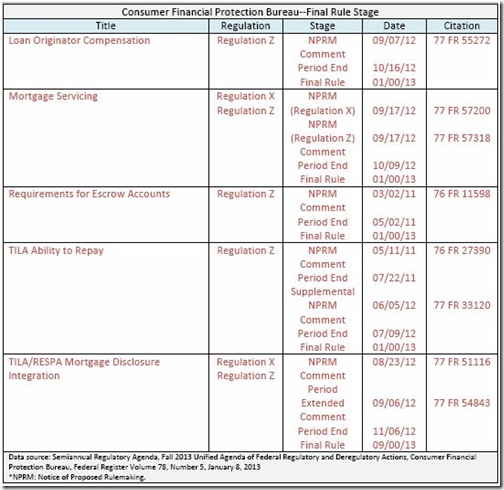 This chart provides a quick overview of certain regulatory changes that the CFPB will promulgate this year. The chart also provides the anticipated Final Rule dates.