The Financial Crimes Enforcement Network (FinCEN) has reported in its Second Quarter 2011 Analysis of mortgage loan fraud suspicious activity reports (MLF SARs) that financial institutions filed 29,558 MLF SARs in the second quarter of 2011 up from 15,727 MLF SARs reported in the same quarter of 2010.
The report, issued on September 28, 2011, shows the continuation of the upward trend in mortgage fraud.
We have reported on FinCEN's MLF SARs analyses.
A large majority of the MLF SARs examined in the second quarter involved mortgages closed during the height of the real estate bubble.
In other words, these SARs are filed on activity that occurred more than two years ago. Many SARs are being filed because financial institutions are uncovering fraud as they sift through defaulted mortgages.
Upward Spike
The upward spike in second quarter MLF SAR numbers is directly attributable to mortgage repurchase demands and special filings generated by several institutions. Omitting these particular submissions, 2011 Q2 MLF SAR numbers would be down 3% from the prior year.
FinCEN noted that 81% of the MLF SARs filed during the quarter involved suspicious activities that occurred before 2008, and 63% involved suspicious activities that occurred four or more years ago. For both 2011 Q2 and 2010 Q2 filings, a majority of reported activities took place between 2006 and 2008.
The report contains a section on reported mortgage fraud activities 90 or fewer days old, with emphasis on so-called "debt elimination" scams, identity theft, Social Security Number (SSN) fraud, and false statements.
2011 Q2 Sample SAR Statistics
Suspicious Activities Described by Filers 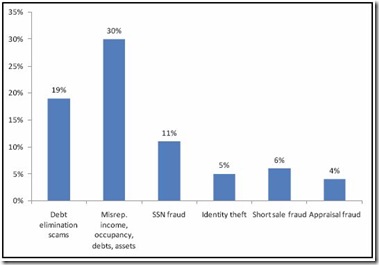 The FinCEN report shows the following areas of fraud: