The Consumer Financial Protection Bureau (CFPB) has taken an innovative approach toward designing the forthcoming, combined Good Faith Estimate and Truth in Lending Disclosure (Mortgage Disclosure): it is using heat maps to determine viewer orientation to information stated on the Mortgage Disclosure. This is part of the CFPB's Know Before You Owe project.
The CFPB announced this unique evaluative tool recently in its issuance, entitled Mortgage Disclosure Is Heating Up.
A heat map is a graphical representation of data, where a two-dimensional color table represents certain variable values. It has many uses in numerous fields.
Heat maps can be extrapolated from statistical values, providing feedback based on specific data points.
In our previous newsletter, we discussed the two sample Mortgage Disclosures that were under consideration by the CFPB. These were the subjects of heat map evaluations.
The forms were labeled "Ficus Bank" and "Pecan Bank."
Copies of those forms are available in our Library.

RESPONDENTS
According to the CFPB, more than 14,000 people submitted a choice between the two forms, and 13,000 individual comments were received.
The heat maps, essentially, were generated from the statistical values created by visitors clicking areas of the form.
The CFPB's evaluation process seems to include the heat maps - which provide the ways areas of the forms were experienced - along with the choice of disclosures selected by the visitors, and, importantly, the review of comments that the visitors provided.

HEAT MAP - MORTGAGE DISCLOSURE
The CFPB is using heat maps to display areas of the Mortgage Disclosure most frequently clicked by website visitors who were viewing the forms. 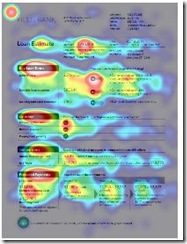 LEARNING CURVE
Thus far, the CFPB has determined the following from the use of the heat maps:
Respondents:


CFPB: "The full loan amount at the top of the page, the projected payments section at the bottom of the page, and the estimated closing payment on the second page all received a lot of clicks."

CFPB: "This is a pretty common occurrence, and on its own, it serves as helpful advice for our designers about where to put certain important information. But the information on the second page (like closing costs, for example) is also an essential part of mortgage disclosure. That's why the next round of testing will focus on the second page."